The Lemax Junior Flight School Animation
Instructions for Opening the Junior Flight School for Repair, click here.
Bravo Lemax!!!! When I saw this Lemax animated item in operation, I was captivated by it!!! The motion is fascinating as the individual flying craft rise and fall in prototypical fashion. I like several of the animated things on the market today, and many are well done and well worth the money if you really like a particular offering. Amusement rides were often a part of the traditional Christmas Garden in some Baltimore homes. And influences like those from the attraction "Roadside America" made animation more popular.

Some of the Lemax products are compatible with O gauge train layouts, but the majority of their figures are a little too large to be O scale. But I am not a slave to scale perfection and this item looks good on my layout with the Lionel and American Flyer trains, and O scale buildings, because the figures are not too big. Lionel makes many animated accessories that are O scale. From an artistic point of view, the Lemax line is very well done, with a lot of personality. I consider these products miniature fine-art sculptures.

I have made many animated things for my layout, but they require a lot of time and tinkering, and it would be quite a challenge to attempt something like this from scratch. Even if you have the talent, your time can be more valuable than money. So although I encourage people to make their own animations, buying these products makes good sense. There was a time when I was a kid where you couldn't find ready-made animation. Now you can. Budgeting your funds will allow a family to buy one nice item per year, perhaps cutting down on the out-door decorations, and eventually have a beautiful display with great memories.

The best thing is to shop early and catch a sale, like those offered by certain craft store chains that have coupon deals at different periods before Christmas. A deep online search may reveal some regional stores with online sales (like Boscov's) have approximately half price deals without coupons. But most popular items will sell out quickly. Typically you'll find something with a cosmetic imperfection that can be corrected. Some of the cast resin parts can be sanded and repainted. The porcelain or ceramic pieces can be touched up or even repainted. Often just a few brushstrokes makes a tremendous improvement. Remember to look for these half price deals a few weeks before Thanksgiving or the better stuff will be sold out shortly thereafter.

When I check the displays at the stores, if they tend to leave the animated items running, they are often not working after just a few days. I don't believe any of these animations are designed to be left running continuously. When the time comes for me to make a repair, I hope to make the mechanism more robust with a better motor. The "on" and "off" cycle is very impressive to watch, but perhaps simplifying the drive mechanism would make it more dependable. I don't care for the sound track or quality of the sound, and I don't intend to use the sound effects, so it wouldn't matter to me if that feature were to fail.

If you are very detailed oriented and have good near-sighted vision, some of this mass produced product won't be painted and assembled exactly to your liking. You may have to go through a couple boxes (if the store will allow) to find an offering to done to your satisfaction. I try to look past things that I can easily correct. For example, there was a grouping of figures with a snowman in the store, and the white paint on the snowman looked dirty and too thinly painted. Perhaps it was supposed to look like rough-texture snow, but all it really needed was a new coat of white acrylic paint. I look for the facial features to be painted to my liking, then I can easily correct other imperfections. Sometimes items are glued on crookedly. This might also be an easy fix, but remember that it requires a little experience and a steady hand to make these corrections. If you are approaching your "golden years," these modifications may be more difficult. I find that if I use magnification and good lighting, and not consume too much coffee for a steady hand, I can usually do these minor corrections with ease. But I have been doing this sort of thing since I was a kid.

What I Did To Mine

I bought mine from an online auction, and I got it for about the same price had I used a 40% off store coupon. If I had known that this item would have been readily available in the stores, I could have waited. My item appeared to be new but "tested" by the seller. This meant that it probably was operated for a certain period for whatever reason. There was evidence that it had been put through a few cycles because a couple of the figures scraped the deck and removed a little paint. To correct this, I immobilized the hinged attachment, with a little CA, keeping the craft tilted upward at the point where it connects to the end of the arm (see illustration below). Now the planes and elephants lean into the center more on the upswing (which some hobbyists may not like), but they don't hit the deck on the downswing. And they fly higher. I remember when I road a similar ride as a child that you did lean in toward the center at the highest position (notice that in the clip above), but the centrifugal force counteracted that a little. Was great fun!!!

The other issues were just minor painting corrections. I sanded the roof of the control tower and a few places on the metallic silver arms before repainting for a smoother surface. The elephants and planes had a few problems, as did the checkerboard pattern on the control tower. A few brushstrokes did the trick. I had acrylic paints that were a good match. All these colors are available off-the-shelf if you don't know how to mix your own colors. The acrylic metallic paints flow on easily and mine finished to a semi-gloss, just like the original paint on the animation. I touched up the scrapes on the deck with a medium gray. I removed the windsocks on the main sign.

The LED lighting from the 2 tall pole lights is a little harsh and bluish. I discovered that if I painted the LEDs with a wash of gloss acrylic varnish and orange acrylic paint, the translucent coating filtered out the bluish cast, however the lights lost some of their intensity. 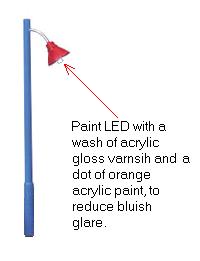 If you attempt to do this, it only takes a dot orange paint to 1/2 teaspoon of acrylic varnish. And apply it thinly; it can always be recoated. The resulting effect is almost identical to an incandescent bulb. If you don't like the effect, it can be wiped off with rubbing alcohol before it completely dries. The chasing LEDs are a nice touch, not too flashy.

I found that you can control the operation by just interrupting the power to the animation at the power supply/wall transformer, while keeping the thumbwheel controller turned to its "on" position. When you reapply power, the lights come on immediately and in about 4 seconds the ride starts up. This avoids the start up and shut down cycle, which is great fun to watch. But it sounds like the motor is laboring at these times, so perhaps running it intermittently, and starting and stopping it by interrupting the power, will keep wear and tear on the mechanism to a minimum. Perhaps using a standard household plug-in timer that allows you to set it at 15 minute intervals, with 15 minutes "on" then 15 minutes "off," would greatly extend the life of the motors. Here is a way to control the operation by hacking the thumbswitch. If I make any kind of mechanical repair or alteration, I will share it here.

It is a wonderful animation that I am happy to have on my layout. Many of the accompanying carnival pieces are also very nice additions to an O scale layout in the "Christmas Garden" tradition.