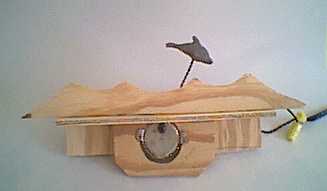 Pictured here is the motor/dolphin assembly mounted on the piece of 1/4 inch plywood that will be set into the layout's surface, flush. The clearances have been checked and there is an approximate 1/8 inch clearance of the fins.
The animation uses a 30 rpm motor. The plywood cut-out wave was coated with latex caulk then painted to resemble frothy waves. This project makes good use of circular motion, like the turntable projects.
Be sure that the motor can be safely placed on or near plywood and other combustibles.

The Dollar Store dolphin is a squirting bath toy that is sold as one of a set of six sea critters. Notice the highlight painted on his eyes and prototypical dolphin coloring. He is glued to the wire, the wire having been inserted up to the top of his head. The wire was painted to match the color of the water in the background in the intended spot on the layout, so it shouldn't be too obvious. The dolphin measures about 2.5 inches long, so he is just slightly larger than O scale (a 9 ft. dolphin would be 2.25" long in O scale). 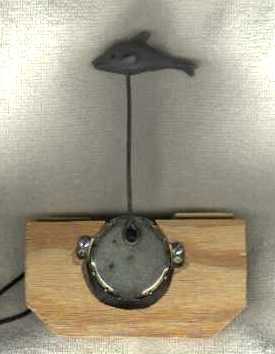 The inexpensive motor was quickly mounted to some scrap plywood, and a section of coat hanger wire was glued with epoxy to the motor's shaft after bending the wire in a loop to friction-fit over the shaft.

This was the concept on the drawing board. Working things out on paper (or in this case on the computer and MS Paint) helps to get an idea organized, avoid some problems, and save time. 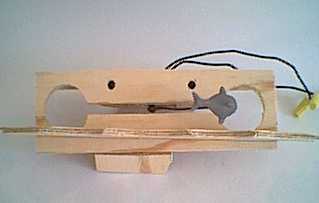 Here is a view showing the cut-out.

Another slightly different angle of the cut-out.


One thing I discovered is that if you add light to the animation from below the layout surface, the dark areas of the holes or openings in the surface seem to disappear. A few 2.5 volt Christmas tree lights to balance the room lighting and eliminate any shadows or darkness is all that it takes to promote the illusion of an uninterrupted surface, almost as if the dolphin was actually jumping up through and diving into painted water. There will be baffles below the surface, similar to wings on a stage, where the blue color will be painted (about 3 inches below what is the current layout surface), so provided there is a little added light to remove any shadow from beneath, the hole in the surface should be much less apparent, especially with the distraction and visual block of the waves and caulk "splashes." (Latex caulking was applied like cake frosting to imitate small wave peaks.) Also, lights placed behind the plywood wave will add a nice lighting effect, similar to the footlights on the lion animation. These lighting effects may minimize or accentuate an object, like the wire that supports the dolphin. Obviously, any way to make the wire less apparent is desirable to enhance the illusion of a free-flying dolphin. So, experimentation is key to getting the right lighting effect, sometimes just moving the light a fraction of an inch can make a huge difference. Fortunately, from the usual viewing angle, the dolphin will be seen against the blue painted water, not the rock pier of the bridge behind. So, painting the wire to match the background is the objective. If the project were to be viewed from all angles, then a compromise of sorts would have to be reached as to what color the wire should be. A thinner wire would be better visually, but in this case no movement or flexibility is best, hence the thicker, more visible wire. Just like most things in life, compromise and moderation are keys to success.

My intention was to have a layout that was viewed only from the front, however I have a 2 ft. wide isle along the back walls and guests will often wall all around. So with this dolphin project, a second wave baffle would be nice on the back side to maintain the illusion. Although it is sometimes like a magician reveling his secrets, it is nice for people to see how an effect was achieved to promote creative thinking, so the reverse viewing angle will be left open.

Video of the dolphin project installed on the layout.