The Modified Figures
They're not just for Christmas anymore! 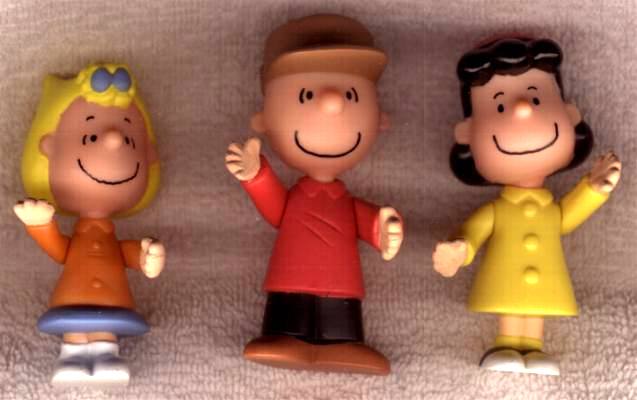 Here are the three modified figures that had permanent "Charlie Brown Christmas" theme objects in their hands. Charlie Brown held a red Christmas ball in his right hand, Lucy had her coffee can bank for her psychiatrist fees in her right hand, and Sally held a pencil in one hand and a clipboard in the other. The other figures have removable items so nothing had to be done with them. The plastic of the arms and body is similar in composition to the hard PVC in plumbing pipe, carves with a hobby knife, and sands much like wood. Before carving, cover the figure with a few layers of masking take to protect the figure, the heads in particular, from a slip of the hobby knife or carving tool. After the basic shape is achieved by removing the bulk of the unwanted object, a little fine detail carving was done to define the palms and fingers, then an emery board was used to sand the surface to its final shape. The entire hand was then painted with common craft acrylics. To get a nice flesh tone, white, orange, tan, and a dot of red paint were combined to match the original flesh color, but a flesh color paint is usually available. This simple carving project is not for a beginner, but if you have a little experience with carving, it is not difficult. Removing these objects allows the figures to be used for non-Christmas themed displays, despite the coats and hats, and railroad themed objects, like shovels, could be temporarily placed in their hands. More care was taken with Charlie Brown's hand since it is more visible in the "waving" position. 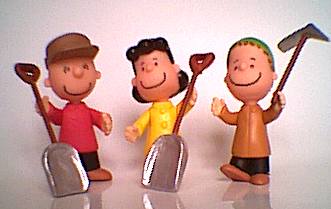 Here are Charlie Brown, Lucy, and Linus with a couple of shovels and a pick ax. These items were made from polymer clay with coat hanger wire for the tool shaft. An acrylic metallic silver paint helps to make the Sculpey look more like metal.

Jack-o-lanterns could be used for Halloween, pumpkins and turkeys for Thanksgiving, colored eggs for Easter, and, of course, Christmas ornaments could be held for the Christmas holiday. So now these figures can take you from Halloween through Easter for a themed display. And the fake loads in Snoopy's ore car can also be changed with the holiday (see photos below). If you don't want to make your own trackside tools from polymer clay, Bachmann makes a nice set of G scale trackside tools, which I already use on the handcar, and these tools could also be placed in the figures' hands for a basic railroading scene, perhaps with a little coal scattered around. So, once again, a simple themed display, no matter how small, is within reach. A circle of O27 track is only 27 inches in diameter. 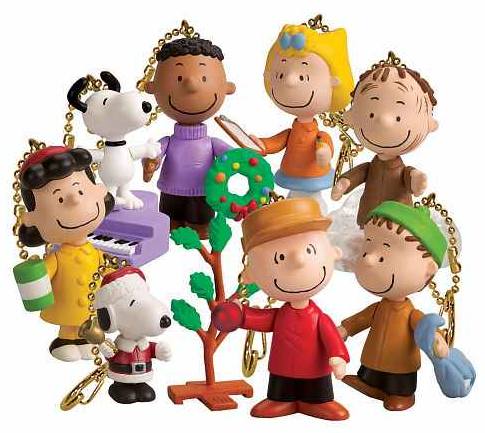 Here they were as manufactured. (This photo is from an online toy store.) Notice the chains, eye hooks in their heads, and the objects they are holding. Linus' blanket and Franklin's wreath are removable. 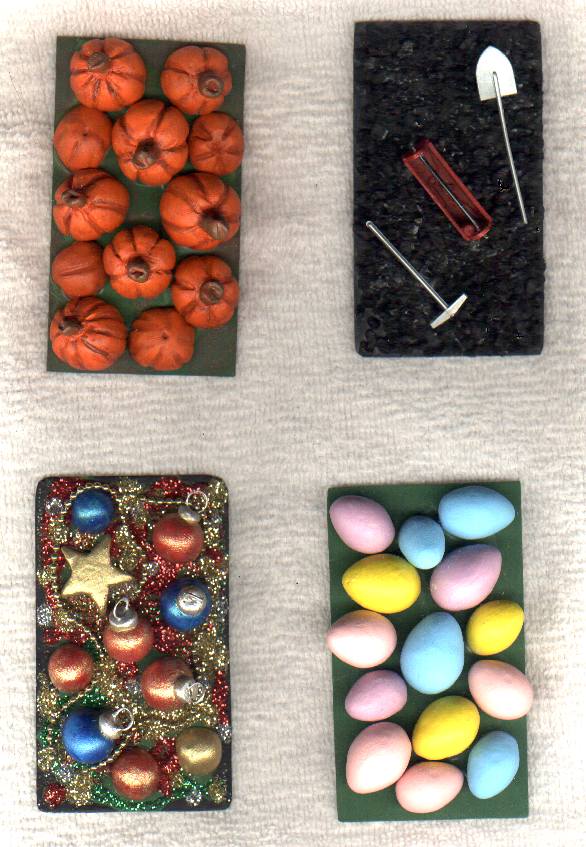 In addition to the fake coal load for Snoopy's ore car, and polymer clay Christmas decorations for the Christmas season, polymer clay pumpkins are suitable for both Halloween and Thanksgiving, and the polymer clay Easter eggs round out the year. Even a Fourth of July theme could be done with firecrackers and Old Glory. The Sculpey polymer clay bakes in a regular kitchen oven and accepts acrylic paints.

The lower portion of some pumpkins, eggs, and Christmas balls are cut off in order to appear as if they are nestled within the ore car. The loads are just superficial since the ore car houses either a reversing unit or other electronics, like an electronic flywheel circuit that is simply a large electrolytic capacitor in parallel with the motor. 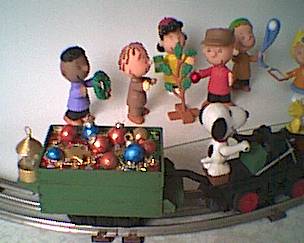 Here is the ore car with the Christmas ornament load.


[for the best photos of these projects]
Here is a great source for various figures: Charlie Brown, Snoopy and Peanuts figures from Time & Space Toys