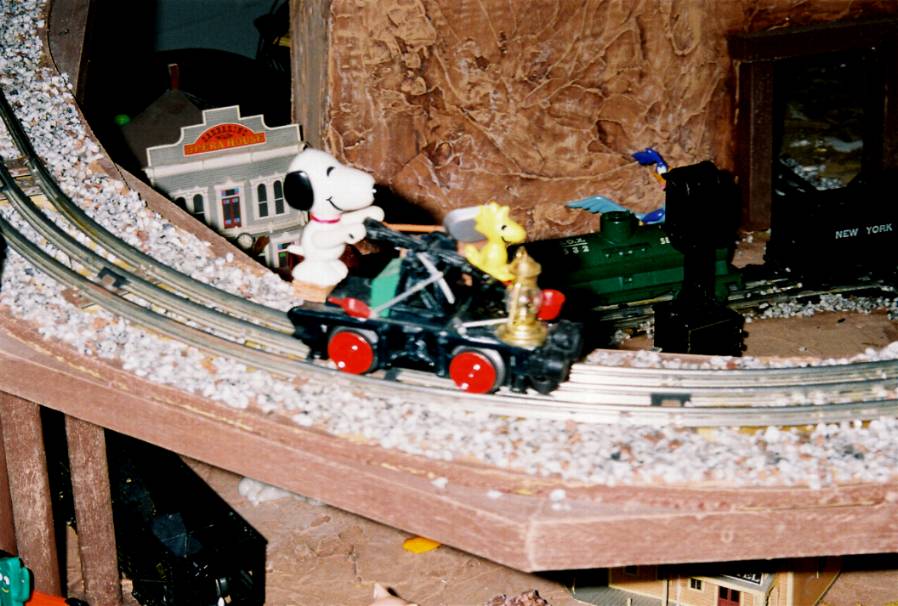 The handcar was made by Lionel around 1990 and sold for about $39 to $55.  As manufactured, the handcar wasn't bi-directional, but would run on both AC and DC.  By removing the built-in rectifier, the DC motor is now reversible by reversing the DC polarity, however it is no longer for use with AC powered track.  It now runs in its own track section, powered by a fixed output wall type DC transformer.  Since the voltage is fixed, there is little chance of a derailment from excessive speed.  The handcar is best appreciated when it is in motion!

This is how the handcar looked as manufactured, the photo taken from a most flattering angle.

This is the bridge rectifier that was removed from the handcar.
The handcar is now for only DC, but it can travel in forward and reverse.

The scoop, pot, pickax, shovel, and working lantern were not part of the handcar as manufactured, but support the gold mining theme, and added color and interest.  The pickax and shovel are G scale model railroad items; the scoop, pot, and lantern are doll house miniatures.  The magnets and bumper (rubber stopper from a door stop) are both functional and ornamental.  The magnets also look like bumpers but activate the magnetic reed switches that control the elevator, and the center rubber bumper works just like a real bumper when the handcar hits the wall of the elevator.

Painted details brought out many of the design features that when unnoticed.  The "tool box" houses part of the drive mechanism, but when painted green helps define the handcar's structure, and added a little extra color.  The box that Snoopy stands on is a wood grained rubber-like plastic that allows for his movement, but was originally white.  That simple brown paint job helped to separate it visually from Snoopy.  Some details of the handcar's black plastic, like rivets and edges, are highlighted with metallic sliver paint.  After the bumper and magnets were attached to the front end, the handcar appeared out-of-proportion, so the red wheels helped to draw the eye away from the stuff on the front and brought the whole thing together.  Although the handcar worked flawlessly and has well done renderings of the beloved characters, it was lacking color and interest.  The added details may be a bit exaggerated, but theatrical techniques like strong colors and exaggeration are a part of the hobby, especially where toy trains are enjoyed.  Smaller detail is lost even when viewed as close as arms length.  In many respects, model railroading (and all its variations) is theater.  Also, exaggerated details are often necessary on a moving object for the details to be apparent.

The lantern was modified so that the bulb's wires would exit the lantern's base and are wired to the motor's leads.  The 12 volt lantern bulb (grain of wheat bulb) receives only 7-8 volts from the track, as does the handcar.  The light is the finishing touch, just like every locomotive needs a headlight!  In case you were wondering, the red scoop and pot are Woodstock's tools, since the shovel and pickax are too heavy for Woodstock to lift.  Before striking gold recently, Snoopy and Woodstock had only located a few missing capacitors and diodes, for which they were paid handsomely in dog biscuits, bird seed, and pizza.

The elevator is a simple plywood structure controlled by four snap action switches, two 4PDT relays, and two magnetic reed switches.  A 12 volt DC geared motor, with a long shaft, moves the elevator car just like a bucket on a rope attached to a well handle.  A small spring on the cable helps maintain tension when the car is in the top position, and prevents over winding.  The elevator's cable is just nylon twine painted brown.  The beauty of the O27 track and large flanged Lionel wheelsets is that larger rail gaps and slightly misaligned rails don't usually pose an operational problem.  The trackage in the elevator car has some margin for error in the way it mates with the fixed trackage.  A few wires supply voltage to the elevator car from beneath, and are weighted to prevent binding and crimping as the car travels up and down.  The handcar waits in the small dark red shack with gray roof until the elevator reaches the bottom.  The entire operation is automatic.