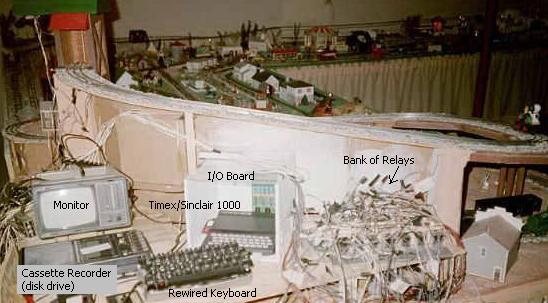 The Timex/Sinclair 1000 with I/O Board

This is an example of how the T/S 1000 with the I/O board is set up
with the layout. The old Timex is used to free the operator from the
control panel, and to run a 30 minute sequence of all the layout features.

The inputs are done by way of a small light bulb causing the photo
resistor to ground the I/O board's input, which indicates to the computer
that a particular input is "on" by way of a PEEK 16381. There is no physical
connection here to the computer, just the light activates the input. The
photo resistor is wired to the I/O board's input.  However, in the case
of the output, there is a physical connection to the computer by way of
the output board's small normally open relays, however there isn't an
actual electrical connection to the computer's circuitry.  (In my case,
an insulated rail or magnetic reed switch turns on a small light bulb to
activate an input.)

The following T/S BASIC program example will stop the train, throw a
turnout's switch, back the train into the station and turn on a sound
effects tape.


Lines 90 - 110 make a loop waiting for the train to hit the track section
that grounds input # 1. The input byte is unpacked by line 100.  Only
input # 1 is being checked here. When the train reaches this section,
the loop is broken and line 200 breaks the current to the track, causing
the train to stop dead.
Line 220, after a pause, re-applies current to the track, causing the
train to be in neutral.  There is a reversing unit in the engine that
cycles forward-neutral-reverse-neutral, etc., every time current is
broken then re-applied.  In the case of a train where polarity is
reversed for reverse movement, then an additional relay is used to
change polarity.
Line 235 activates the turnout's switch machine momentarily.
Line 240 removes current a second time to the track.
Line 260 re-applies current to the track and train reverses direction.
Line 300 - 302 waits for the train to hit the section of track near the
r/r station, activating input # 2. Only input #2 is being checked here.
Line 315 breaks track current, causing train to stop.
Line 330 turns on sound effects by way of POKE 4, and applies current to
the rails, with train now in neutral with full interior illumination.

To activate multiple relays, simply add up the corresponding
numbers.  For example, if you want sound effects while track is powered,
line 200 would be POKE X, 5 (1 for relay #1, and 4 for relay # 3).  See the
input/output table below.  Simply add up the corresponding number to activate
relays.  POKE X, 36 would activate relays #6 (POKE 32) and # 3 (POKE
4).  Unpacking the input byte is a little harder.  Notice line 100.
Simply change the value that B is divided by to check for a particular
input to be "on."  To check for input #8, any number greater than 127 in
PEEK 16381 would indicate input # 8 is "on."  In my case, I only check
for one input at a time, so I don't need to unpack the whole input byte,
just one single bit.

In the third diagram, notice how a second device can be
activated by one relay.  It is best to use 4PDT relays if possible.
A  relay can do double (even triple) duty by having different
track sections wired to just one relay, and its function would change
depending on where the train may be at any given time.  (See diagram
below for another way to get more control from relays.)

Above is not the actual T/S BASIC program, but rather a simplified
version for clarity.

This example shows how 2 I/O board outputs can become 4 unique outputs.

Overview of interface for BASIC program example above..

Although 4PDT relays were used, this is an example of how
one 2PDT relay can control track power and another item.

Example of how the layout communicates with the computer
by way of a photo resistor.  A magnet on the underside of a train will
close the reed switch positioned in the track.

This table is meant to be a programming aid.