An Accident in Lancaster!
A Short Story 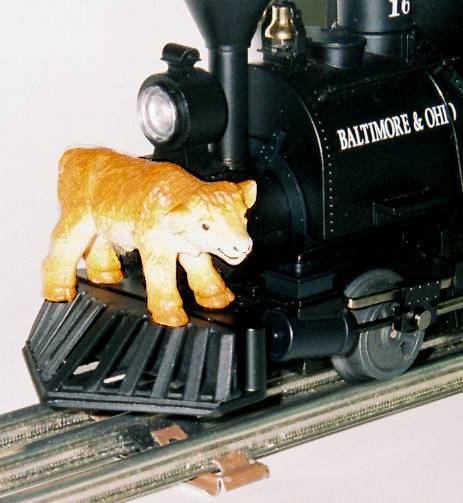 A recovered Buttercup poses for photographers!


It was a beautiful day in Lancaster. Buttercup, the Brown's beloved pet calf, strayed from her pen to lunch on some tasty-looking weeds beside the tracks. The Cannonball was on its daily run, making a few stops along the way through the picturesque farms. The engineer didn't see the little calf on the tracks in time, and suddenly the terrible sound of squealing brakes filled the valley. Buttercup was thrown 15 feet from the locomotive and appeared lifeless!

Fortunately, 3 college students were in the area taking in the local attractions when they came upon the accident. They picked up the calf, put her in their jeep and drove to a group of large homes they had just passed. The students got directions to a local veterinarian and hurried on their way. Neighbors then brought the elderly farmer and his wife to the vet's office. The Browns have seen a lot of hardship in their lifetime and were prepared to hear bad news. This pet calf is everything to the Browns who still worked their little farm.

After a very tense hour, the vet entered the room waiting room. The look on his face was hard to interpret; he was surprised to see that such a large crowd had gathered. Then came the words everyone thought they would never hear, "She'll be alright!" The little calf was going to be fine and had only suffered a few broken ribs. Thank God the owners of the Cannonball just installed a cowcatcher on the old Porter. The little calf would have gone under the loco's wheels if not for the simple cowcatcher.

Buttercup has learned her lesson well, and she will no longer snack along the rails!

This loco and tender were featured in the Feb/March 2008 issue of O Gauge Railroading magazine, Run 227, as a "how to" project by me. The cowcatcher and tender are homemade, my own design. The log car is also my design, with "logs" cut from a privet hedge.