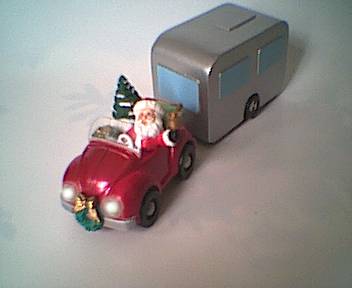 What does Santa do the rest of the year?
He loves to travel in his RV.  Mrs. Claus prefers to ride in the trailer, which comfortably accommodates 4 adults, several elves, and 9 reindeer. A homemade styrene shell covers a Bachmann HO scale 0-6-0 diesel switcher's chassis, which has been cut down about 5/8th inch in overall length. The trailer has been built over the original switcher's shell which was also trimmed in length. The non-driven center wheels have been removed. The auto, a red VW convertible with Santa (a Kurt S. Adler Christmas tree ornament), only needed a Kadee freight truck to make it road-worthy. 2 bright headlights were added, wired back to the switcher chassis. This new Bachmann switcher, with small can motor, can be very easily fitted under/inside many O scale die cast autos, or it can push an auto if disguised as a trailer or similar towed item. This configuration, with the switcher's center wheelset removed and the single truck under the VW, will handle a tight 12-14 inch diameter HO flextrack curve, so roadways can snake through the layout if desired. HO rails are treated like streetcar tracks in asphalt on the layout, so they are rather unobtrusive. 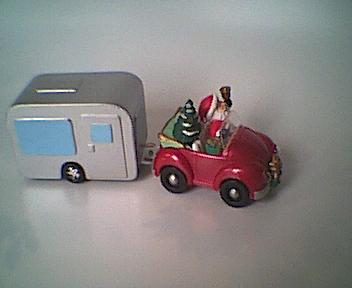 This custom built Airstream has well served Santa almost as long as Rudolph.

The underside tells the whole story at a glance.
The HO truck under the VW is slightly off-center to allow for potential clearance problems due to Santa's arm overhanging the car door on his left.


It may trouble some hobbyists that the auto and trailer wheels of my homemade items don't move or turn as they travel down the road. Although not impossible and not very difficult to achieve, it is more complicated and problematic to make moving wheels since they would each need to be on short axles and independently suspended, or have a long floating axle with independently turning wheels, for the wheels to ride on the road. The roadbed would need to be relatively consistent and there would be wear on the painted road surface. (Or the wheels could be geared to the mechanisms and almost touch the road.) But I discovered one important thing when I did my first vehicle that had molded, non operational wheels, and that is that you can't tell the wheels aren't turning unless there is some detail, like hub cap spokes or large tire tread, that makes it obvious that there isn't any turning. Some eagle-eyed visitors have asked why some vehicle wheels move and others don't. Actually, none of them move, but there is the illusion of motion when the wheels and hub caps are smooth. The smooth wheels and hub caps actually appear to move as they catch the light from various angles. However, with the scenery in place and other distractions on the layout, the wheels aren't an issue for most. I prefer to think of them as animated vehicles, not model race or slot cars. If you would like the wheels to move and for the car to actually ride on your layout, best to build your project on a slot car chassis and gear down the mechanisms to a more controllable speed, running on slot car track. I control these homemade items like independent HO trains, often running 2 at a time on the same loop. These animated vehicles support the illusion of busy daily life the whole layout hopes to convey. The interaction of the trains and the autos is very enjoyable, especially at the railroad crossing. The trains are still the stars of the show for most people. An On30 trolley would be reason enough to justify the HO rails in the road for the purest. High frequency AC lighting keeps the headlights glowing when the vehicles are stopped on the main road, but Santa rides around the former skateboard and bike path in the suburban neighborhood and is not supplied with HF AC. (The path has just been visually widened to resemble the typical layout road width.)

This is the electronic flywheel, for very smooth operation over the crossover and dirty track. Just be sure to follow all the rules for electrolytic, polarized capacitors, and wear safety goggles and face protection while testing your circuit. The capacitor might not be necessary if current was being picked up from the wheels under Santa's VW, however the idea does work well and could be used on most DC motors, I suspect, but don't use the flywheel circuit with HF AC. Perhaps a low tech solution, with no fancy circuitry, but it does prove that simple ideas do work.

Be careful when using capacitors! They must always receive the correct DC polarity and never be given voltage over their rating, or they can explode. I like to use a capacitor rated at approximately 3 times the voltage it may receive. Remember to protect your face, your eyes especially, when testing these circuits! If you are not familiar with using capacitors, get the "in person" advice of an expert.

The right side of the figure 8 HO line circles the 3 large suburban houses at the bottom of this photo. 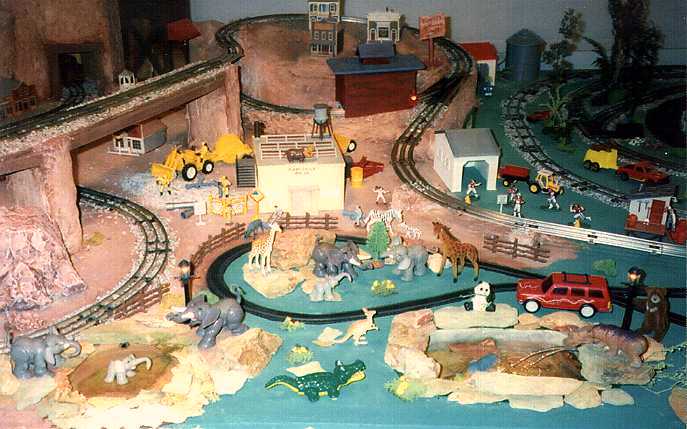 The other side of the HO figure 8 track circles the original elephant animation. Notice the tight 13 inch diameter loop of HO flextrack. 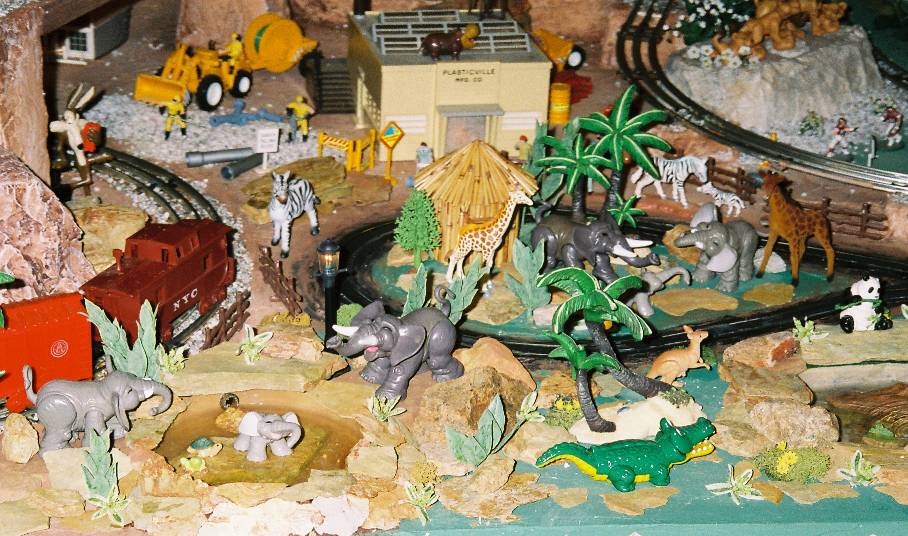 The bike/skateboard path has been visually widened, no actual track changes, to accommodate the visual width of Santa's VW and Trailer. 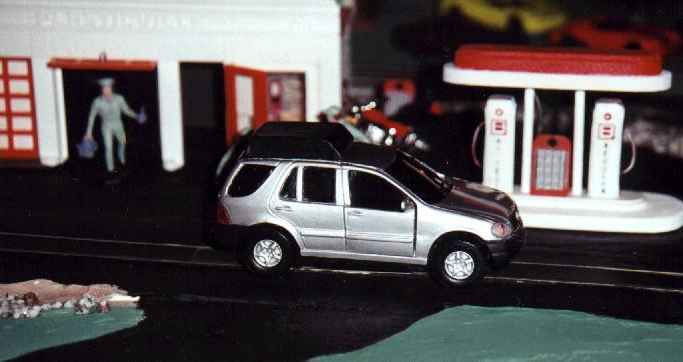 This die cast O scale SUV, powered by HO 0-4-0 diesel guts, is well-liked because of its realism. Notice the HO rails in the roadway. The standard code 100 HO flextrack has a strip of black plastic kitchen table placemat as the paving between the rails. After being cut into strips, the placemat strips bend to the desired contour and are glued into place leaving a standard HO flangeway. Drywall compound is spread on up to the outside of the rails, covering the ties and painted black after drying. The SUV's wheels are dummy wheels with the SUV riding on its HO wheelsets underneath.


The site owner is not and cannot be held liable for fire, electrical shock, property damage, bodily injury, loss of life, or accident of any kind caused by electrical circuits or any ideas, projects, techniques, or information contained on this site. The visitor assumes all risk and responsibility for any loss, injury, accident or damage arising from the use of information, ideas, techniques, projects, concepts, components, products, and circuits on this site.